Some colors are available only in certain areas. Ask your local distributor. 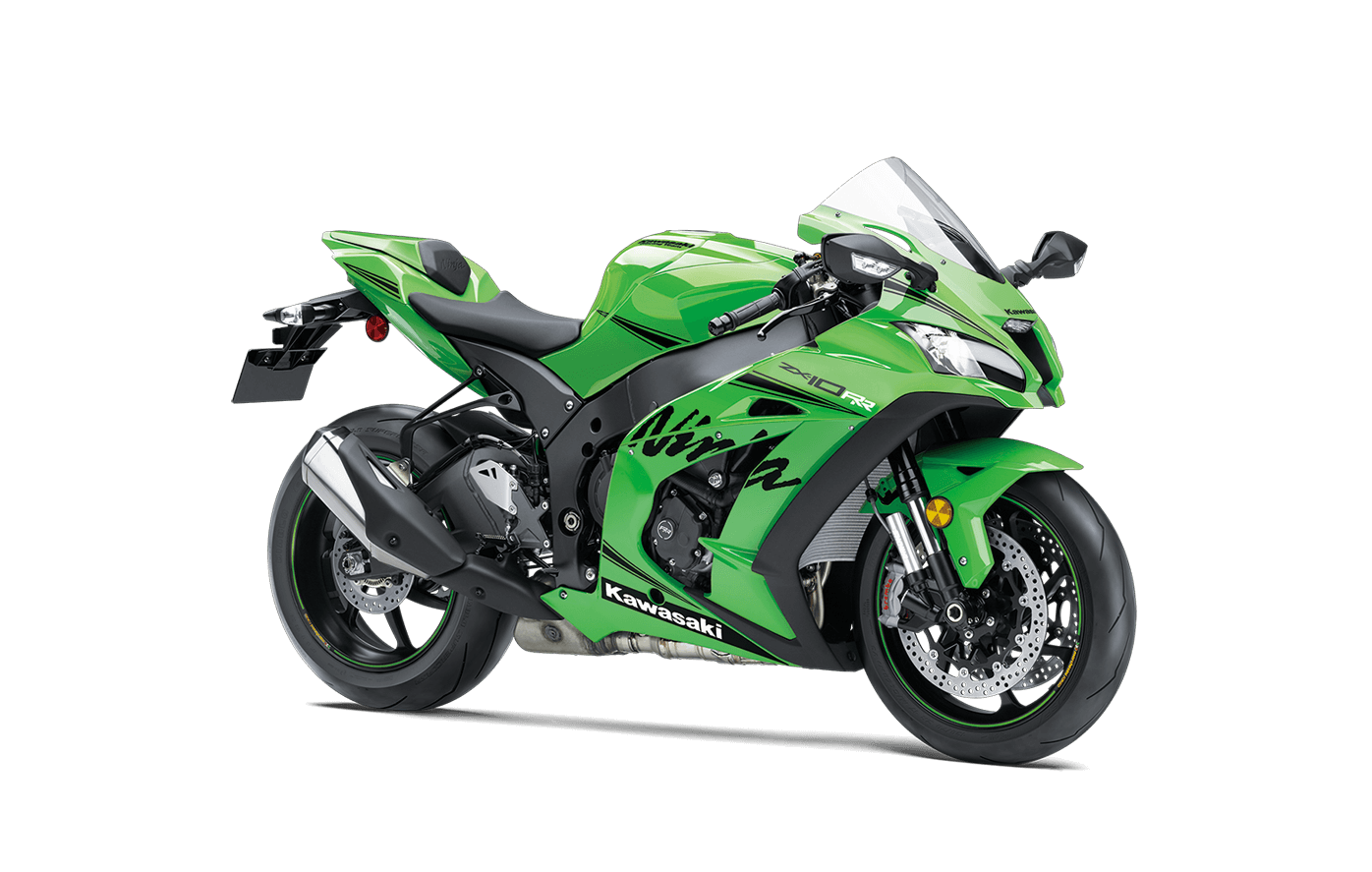 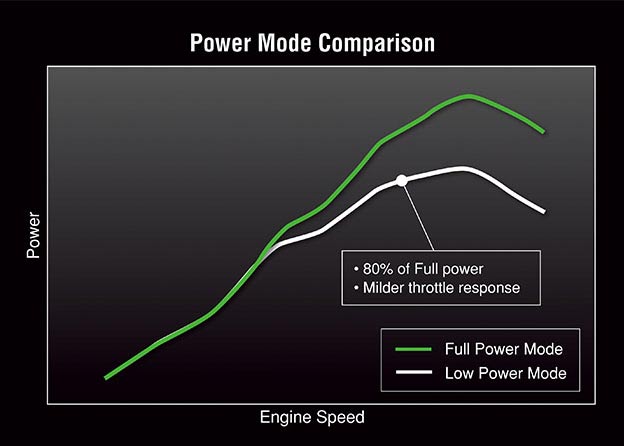 ABS
(Anti-lock Brake System)
Sudden over-application of the brakes, or braking on low-grip surfaces (surfaces with a low coefficient of friction) such as wet asphalt or manhole covers, may cause a motorcycle's wheel(s) to lock up and slip. ABS was developed to prevent such incidents. Kawasaki ABS systems are controlled by highly precise and extremely reliable programming formulated thorough testing of numerous riding situations. By ensuring stable braking performance, they offer rider reassurance for even greater riding enjoyment.

Economical Riding Indicator
Using high-precision electronics for engine management, Kawasaki models can achieve a high level of fuel efficiency. However, fuel consumption is greatly affected by throttle use, gear selection, and other elements under the rider's control. The Economical Riding Indicator is a function that signals when current riding conditions are consuming an optimally low amount of fuel. The system continuously monitors fuel consumption, regardless of vehicle speed, engine speed, throttle position and other riding conditions. When fuel consumption is low for a given speed (i.e., fuel efficiency is high), an "ECO" emblem appears on the LCD screen of the instrument panel. By riding so that the "ECO" mark remains on, fuel consumption can be minimized.

While effective vehicle speed and engine speed may vary by model, paying attention to conditions that cause the "ECO" mark to appear can help riders improve their fuel efficiency – a handy way to increase cruising range. Further, keeping fuel consumption low also helps minimize negative impact on the environment. 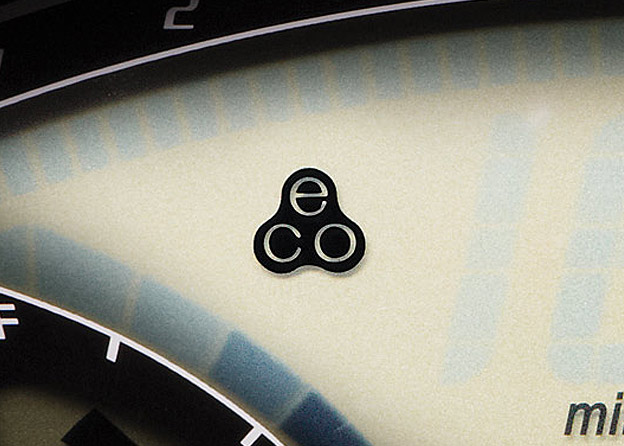 Electronic Throttle Valves
Kawasaki’s fully electronic throttle actuation system enables the ECU to control the volume of both the fuel (via fuel injectors) and the air (via throttle valves) delivered to the engine. Ideal fuel injection and throttle valve position results in smooth, natural engine response and the ideal engine output. The system also makes a significant contribution to reduced emissions. 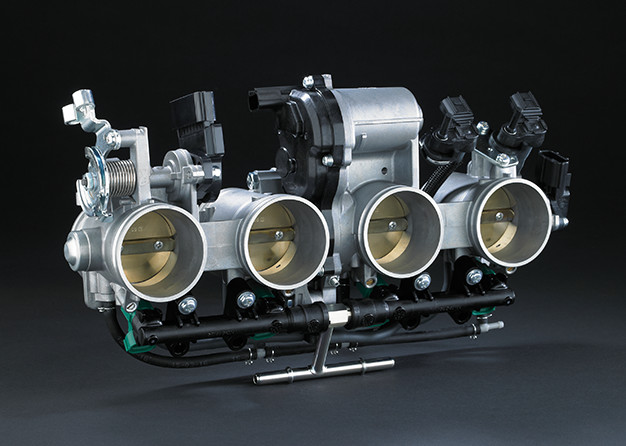 Horizontal Back-link Rear Suspension
When comparing Kawasaki's traditional Uni-Trak® rear suspension, which mounts the shock unit vertically, with Horizontal Back-link rear suspension, the shock unit is almost horizontal. Kawasaki's original suspension arrangement places the shock unit very close to the bike's center of gravity, greatly contributing to mass centralization. And because there is no linkage or shock unit protruding beneath the swingarm, this frees up space for a larger exhaust pre-chamber (an exhaust expansion chamber situated just upstream of the silencer). With a larger pre-chamber, silencer volume can be reduced, and heavy exhaust components can be concentrated closer to the center of the bike, further contributing to mass centralization. The overall result is greatly improved handling. 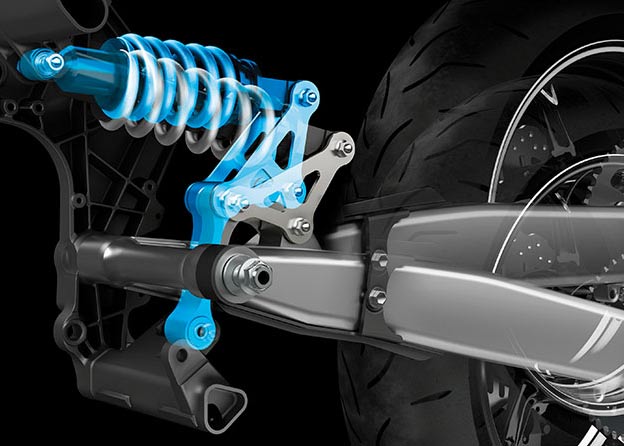 IMU-Enhanced Chassis Orientation Awareness
The strength of Kawasaki’s cutting-edge electronics has always been the highly sophisticated programming that, using minimal hardware, gives the ECU an accurate real-time picture of what the chassis is doing. Kawasaki’s proprietary dynamic modelling program makes skilful use of the magic formula tyre model as it examines changes in multiple parameters, enabling it to take into account changing road and tyre conditions.

The addition of an IMU (Inertial Measurement Unit) enables inertia along 6 DOF (degrees of freedom) to be monitored. Acceleration along longitudinal, transverse and vertical axes, plus roll rate and pitch rate are measured. The yaw rate is calculated by the ECU. This additional feedback contributes to an even clearer real-time picture of chassis orientation, enabling even more precise management for control at the limit. 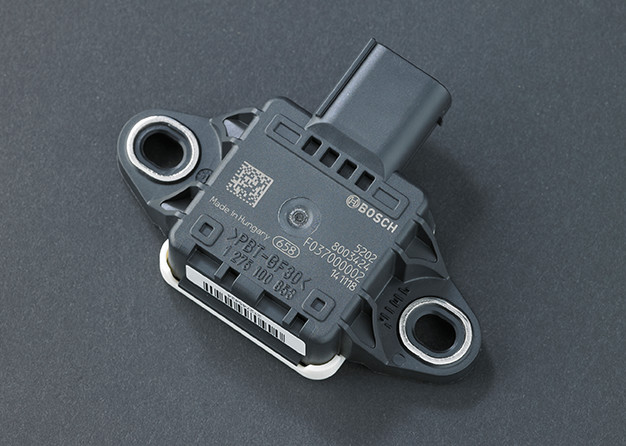 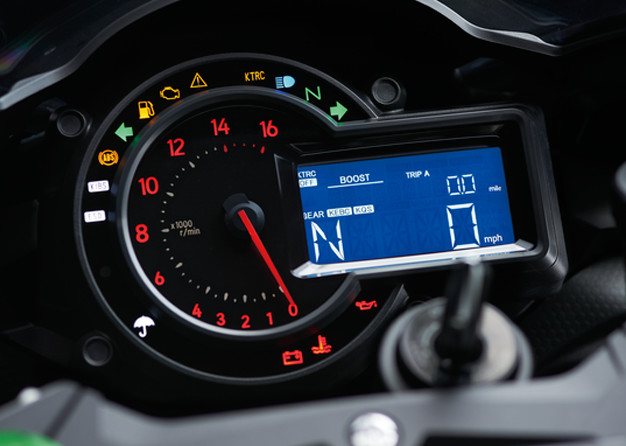 KCMF
(Kawasaki Cornering Management Function) ABS
Using the latest evolution of Kawasaki’s advanced modeling software and feedback from a compact IMU (Inertial Measurement Unit) that gives an even clearer real-time picture of chassis orientation, KCMF monitors engine and chassis parameters throughout the corner – from entry, through the apex, to corner exit – modulating brake force and engine power to facilitate smooth transition from acceleration to braking and back again, and to assist riders in tracing their intended line through the corner. The systems that KCMF oversees vary by model, but may include: 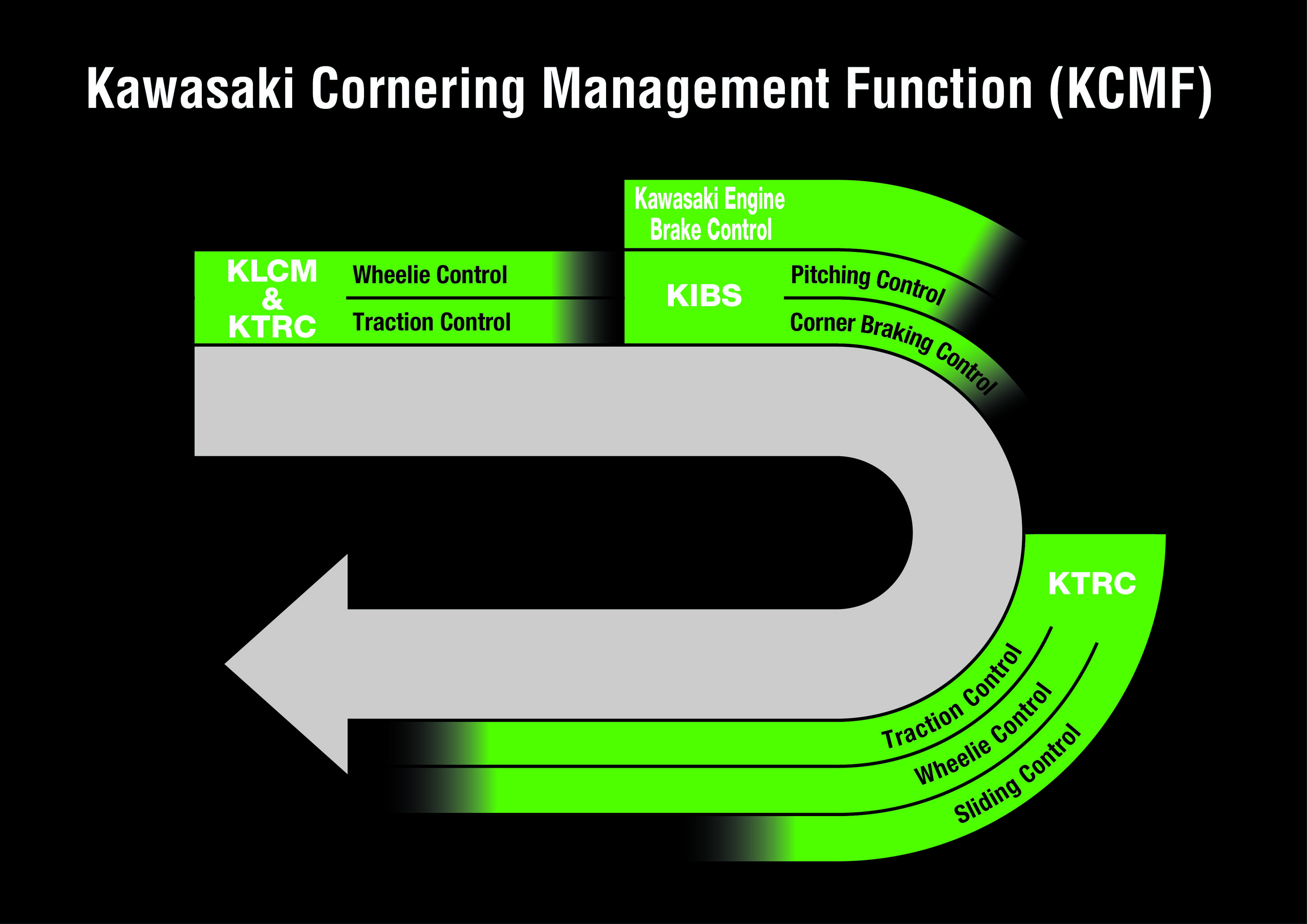 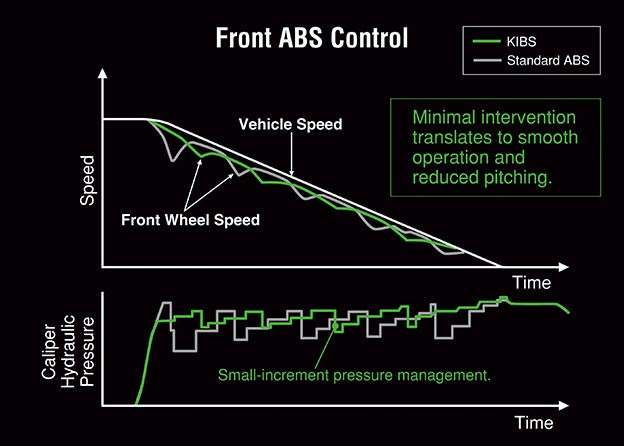 KQS
(Kawasaki Quick Shifter)
Designed to help riders maximise their acceleration on the circuit by enabling clutchless upshifts with the throttle fully open, KQS detects that the shift lever has been actuated and sends a signal to the ECU to cut ignition so that the next gear can be engaged without having to use the clutch. Depending on ECU settings (or when a race kit ECU is used), clutchless downshifts are also possible.
Available on NINJA® ZX™-10RR , NINJA H2™R , NINJA H2™ , NINJA H2™ CARBON , NINJA® ZX™-10R ABS , NINJA® ZX™-6R ABS , NINJA H2™ SX SE+ and VERSYS® 1000 SE LT+ 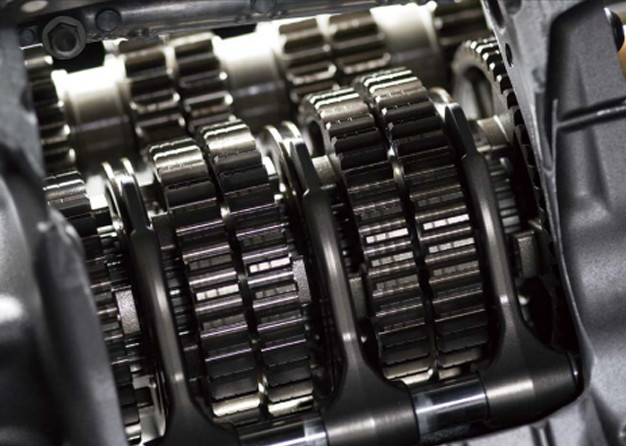 Launch Control Mode
In motocross racing, getting a good start is critical. A few tenths of a second can make the difference between getting the holeshot or getting buried in the pack. In slippery conditions, getting the maximum drive from a motocross bike requires precise control of both the clutch and throttle.

Launch Control Mode helps riders get out of the gate quickly by complementing high-level technique with engine management. Featured on a mass-production motocross bike for the first time on Kawasaki's KX™450F, the system activates a separate engine map designed to get a more efficient start off the line. The system is designed to the same specifications as that used by Kawasaki Factory racers competing in the AMA Supercross and Pro Motocross championships.

Launch Control Mode is activated simply by pressing a button on the handlebar. The Launch Control map slightly slows down the ignition timing to help tame the engine's strong torque and reduce wheel-spin off the start. Launch Control Mode is only active in the first two gears off the start, disengaging and returning to the standard engine map automatically once the rider shifts into third gear. The system gives riders a great advantage out of the gate and puts them in a better position to control the race.
Available on NINJA® ZX™-10RR , NINJA H2™R , NINJA H2™ CARBON , NINJA® ZX™-10R ABS , NINJA H2™ , KX™250 and KX™450 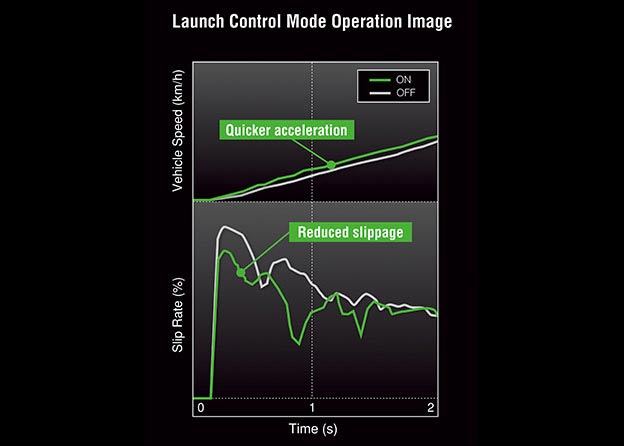 S-KTRC
(Sport-Kawasaki TRaction Control)
S-KTRC, Kawasaki's original predictive traction control, uses the same base technology as the Kawasaki works machines that competed in MotoGP, the pinnacle of motorcycle racing. This technology continually controls the rear wheel slip that occurs when power is applied, ensuring optimal acceleration. In general, maximum forward drive requires a certain amount of slip (usually between 20-30% slip ratio, i.e. the rear wheel is turning 20-30% faster than the front). To ensure the most effective transfer of power to the tarmac, S-KTRC monitors the slip ratio in real time, and governs engine power delivery to optimize rear wheel traction.

S-KTRC monitors a number of parameters, including front and rear wheel speed, engine rpm and throttle position. Conditions are confirmed every five milliseconds, at which time the system looks at each of the parameters, as well as their rate of change. This unique Kawasaki method makes it possible to interpolate and predict how the bike will behave in the next instant.

Unlike 1-mode KTRC, which cuts power as soon as rear slip is detected, S-KTRC uses minimal power drops to ensure the slip ratio for optimal traction is maintained. Because its goal is to maximize acceleration, as long as sufficient forward motion is detected, this sport riding system will allow power wheelies as the bike comes out of corners.
Available on NINJA® ZX™-10RR and NINJA® ZX™-10R ABS 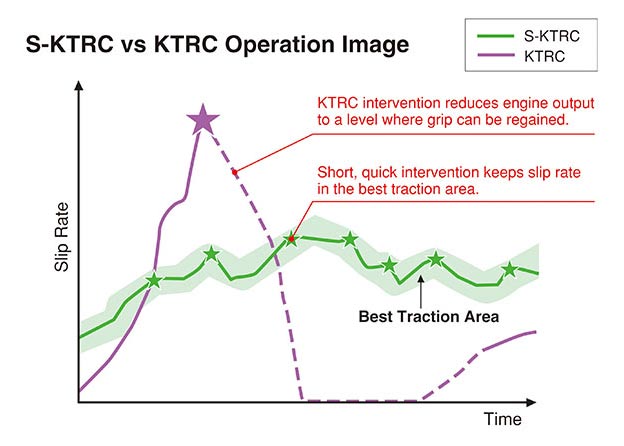 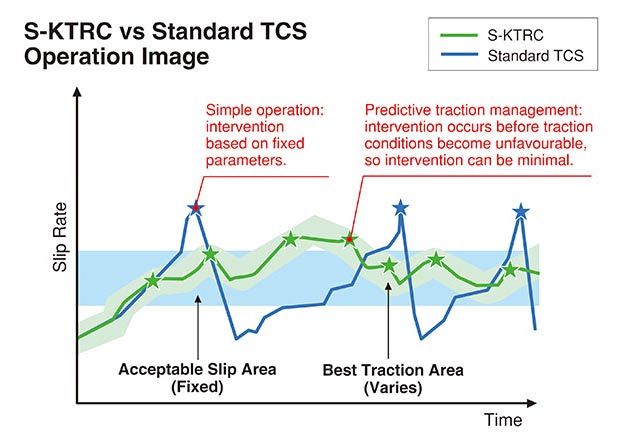 Kawasaki Launch Control Mode
(KLCM)
Designed to assist riders by optimizing acceleration from a stop, KLCM electronically manages engine output to minimize wheelspin when moving off.
With the clutch lever pulled in and the system activated, engine speed is limited to a determined speed while the rider holds the throttle open. Once the rider releases the clutch lever to engage the clutch, engine speed is allowed to increase, but power is regulated to minimize wheelspin and help keep the front wheel on the ground. The system disengages automatically once a predetermined speed has been reached, or when the rider shifts into 3rd gear. Depending on the model, riders can choose from multiple modes, each offering a progressively greater level of intrusion.
Available on NINJA® ZX™-10RR , NINJA® ZX™-10R ABS , NINJA H2™R , NINJA H2™ , NINJA H2™ CARBON and NINJA H2™ SX SE+ 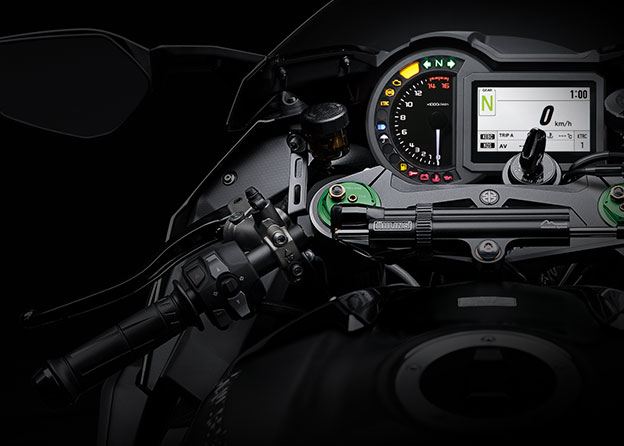 You are leaving a part of the website that is not a part of Kawasaki-la.com.

Continue on to the site by clicking here.

Thank you for visiting kawasaki-la.com.